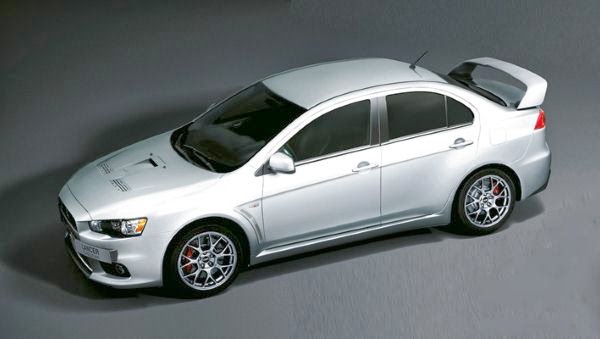 More power than the old.  Specs.

This model will run as a Special Edition FQ-440MR with a re-mapped ECU, Tubular Janspeed Exhaust Manifold, HKS turbo, Bigger intercooler 2.0-litre at 440bhp and 412lb ft torque.  This will not have a manual gearbox, as it powers all four wheels through a six-speed dual clutch automatic.

The suspension will be lowered, brakes will sport a 6-piston caliper set up along with 18" BBS wheels.

Inside the new EVO one will sit in Recaro bucket seats while listening to an 8 speaker audio system and Nav screen.  Bluetooth will be featured as well.

New tech with all FQ-440 MR's will have a data recorder that will logs driving style, performance, location and diagnostics.   The only catch now is Mitsubishi will void your warranty for going hard and WOT.

No news about when/if we will see this new monster in the states, but then again hold onto your wallet because this MR will run up more than $50,000.

For that cost, might as we go for it's leading competitor. The new WRX STI.
Posted by Matt Stringham at 2:40 PM