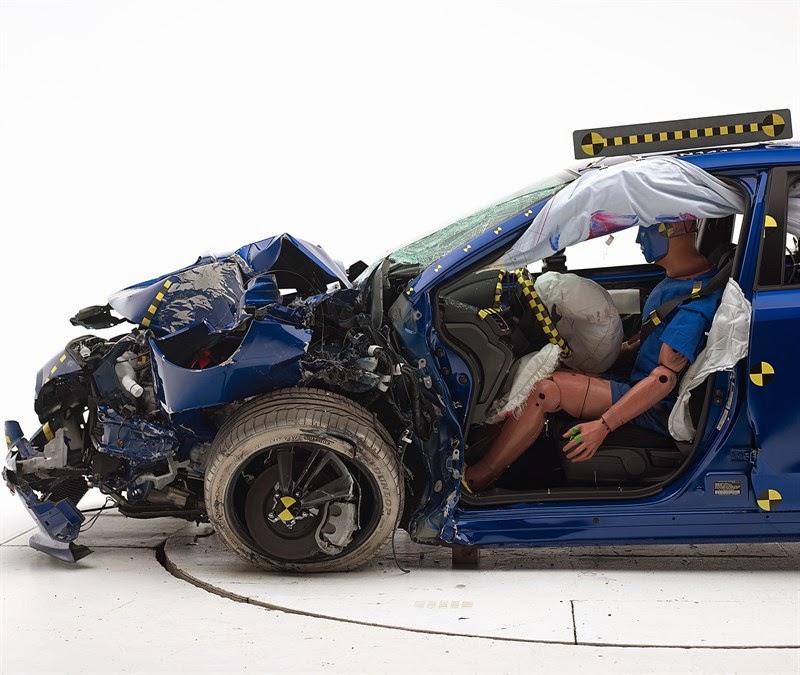 The IIHS (Insurance Institute for Highway Safety) released new crash test data for the new 2015 Subaru WRX and Subaru WRX STI and it has made the IIHS Top Safety Pick. 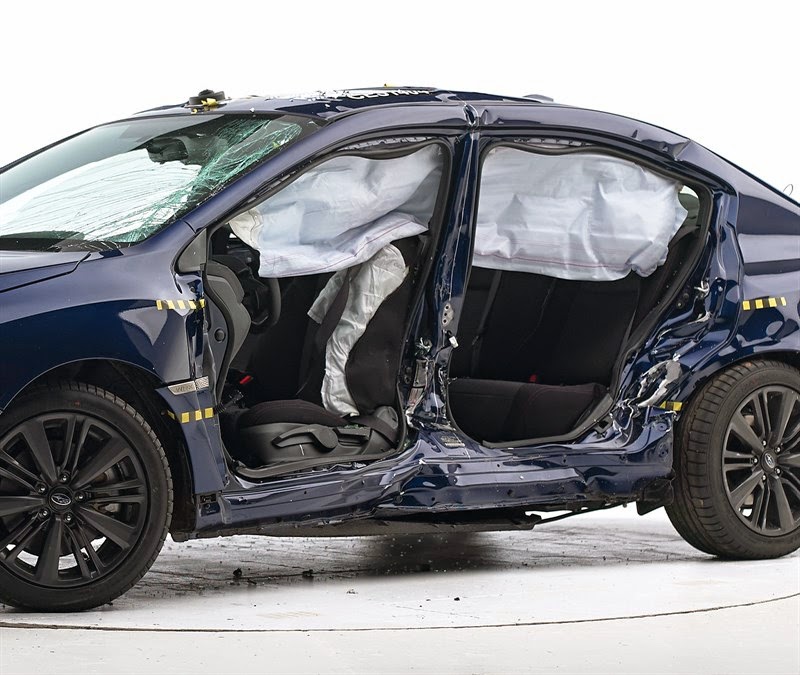 The new WRX and STI received top ratings for all 5 aspects of crash test testing.


Release from Subaru:
"2015 SUBARU WRX AND WRX STI EARN IIHS 2014 TOP SAFETY PICK
May 5, 2014, Cherry Hill, N.J, Subaru of America, Inc. today announced that the Insurance Institute of Highway Safety (IIHS) has awarded the 2015 Subaru WRX and WRX STI the IIHS 2014 TOP SAFETY PICK award for good performance in each of the Institute’s crashworthiness evaluations, including the small overlap front test. This is the first time IIHS has rated the WRX and WRX STI, which were both completely redesigned for 2015.
With the addition to the 2015 WRX, Subaru now has six models that have earned 2014 safety awards
from IIHS – three with TOP SAFETY PICK and three with TOP SAFETY PICK+ including its Legacy sedan and Outback models with optional EyeSight. Subaru has more 2014 IIHS Top Safety Picks than any other brand.
The Symmetrical All-Wheel Drive Subaru WRX is one of the brand’s performance models and comes standard with a 2.0-liter turbocharged four-cylinder 268 horsepower engine, mated to a six-speed manual transmission, and is priced at $26,295. The higher-performance WRX STI model is priced at $34,495 and features a turbocharged, 2.5-liter boxer four cylinder engine that produces 305 hp.
In addition to the standard model, the WRX STI is offered in Launch Edition. Limited to just 1,000 units over the first three months of production, and offered exclusively in WR Blue with gold BBS® alloy wheels and blue trim throughout the interior. All WRX STI models feature Alcantara seating surfaces and standard LED exterior lighting, and the Limited trim adds leather, a power driver's seat, a moonroof and a premium Harman/Kardon audio system. Navigation and higher-end audio are optional on other models. "Safety is one of our brand tenets and so we are extremely proud to have earned a TSP rating for our performance models" said Thomas J. Doll, president and chief operating officer, Subaru of America, Inc. “we are committed to providing engaging driving together with safety and this award is testament to that commitment.”
About IIHS
The Institute's frontal crashworthiness evaluations are based on results of a moderate overlap frontal and small overlap crash test. Each vehicle's overall evaluation is based on measurements of intrusion into the occupant compartment, injury measures recorded on a 50th percentile male Hybrid III dummy in the driver seat, and analysis of slow-motion film to assess how well the restraint system controlled dummy movement during the test.
Building on its long-running vehicle ratings program for consumer information, IIHS introduced the small overlap test in 2012 to further improve occupant protection in frontal crashes. Most automakers design their vehicles for good performance in the IIHS moderate overlap frontal test and the federal
government’s full-width frontal test, but many haven’t addressed the problem of small overlap crashes. In a 2009 IIHS study of vehicles with good ratings for frontal crash protection, small overlap crashes accounted for nearly a quarter of the frontal crashes involving serious or fatal injury to front seat occupants.
The small overlap test is a demanding crash that replicates what happens when the front corner of a car collides with another vehicle or an object like a tree or utility pole. In the test, 25 percent of a car’s front end on the driver side strikes a 5-foot-tall rigid barrier at 40 mph.

Side evaluations are based on performance in a crash test in which the side of a vehicle is struck by a
barrier moving at 31 mph. The barrier represents the front end of a pickup or SUV. Ratings reflect injury measures recorded on 2-instrumented SID-IIs dummies representing a small (5th percentile) woman, assessment of head protection countermeasures, and the vehicle's structural performance during the impact.

Rear crash protection is rated according to a two-step procedure. Starting points for the ratings are
measurements of head restraint geometry -- the height of a restraint and its horizontal distance behind
the back of the head of an average size man. Seat/head restraints with good or acceptable geometry are tested dynamically using a dummy that measures forces on the neck. This test simulates a collision in which a stationary vehicle is struck in the rear at 20 mph. Seats without good or acceptable geometry are rated poor overall because they can't be positioned to protect many people.
In the roof strength test, a metal plate is pushed against 1 side of a roof at a constant speed. To earn a
good rating for rollover protection, the roof must withstand a force of 4 times the vehicle's weight before reaching 5 inches of crush. This is called a strength-to-weight ratio. For an acceptable rating, the minimum required strength-to-weight ratio is 3.25. A marginal rating value is 2.5. Anything lower than that is rated poor.

About Subaru of America, Inc.
Subaru of America, Inc. is a wholly owned subsidiary of Fuji Heavy Industries Ltd. of Japan.
Headquartered at a zero-landfill office in Cherry Hill, N.J., the company markets and distributes Subaru vehicles, parts and accessories through a network of more than 600 dealers across the United States. All Subaru products are manufactured in zero-landfill production plants and Subaru of Indiana Automotive Inc. is the only U.S. automobile production plant to be designated a backyard wildlife habitat by the National Wildlife Federation. For additional information visit media.subaru.com"
Posted by Matt Stringham at 1:40 PM