Forced induction systems have taken a whole new spin as automotive companies press forward in perfecting the design and delivering more turbo option vehicles. This allows for a more powerful and fuel efficient car, while utilizing smaller, EPA friendly engines.
Hybrids and electrics get all the buzz when it comes to MPG and 0-emissions. However, what consumers gain in MPG they lose in power and performance; it’s usually a double edged-sword. The turbo is slowly but surely making the best of both MPG and power, merging the best of both worlds.

How do Turbochargers Work? 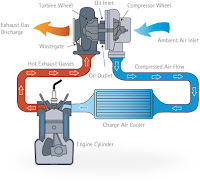 Think of a motor or an engine as a giant air pump, the faster the air goes in and the faster the air goes out, the faster and more efficient the motor can run. Turbochargers work by recycling air from the vehicles exhaust system and redirecting it back into the motor via the intake, putting the air in faster than the engine traditionally sucks it in. This is called forced induction, and as a result more horsepower and torque is gained without adding extra cylinders, which saves gas.

Who’s Hopping on the Bandwagon?

Over 14 automobile manufacturers have turbocharged vehicles in their 2013 line up.  Some of them are known for their turbocharged sports sedans & coupes, such as Subaru, Mitsubishi and Volkswagen. This year, several new manufacturers can be added to the list, including Buick and Kia.  That’s right, Buick! Who could have imagined grandma or grandpa rolling up in a turbocharged 220hp Regal, or a 250hp Verano. Automobile manufacturers are beginning to perfect the efficiency of turbos and we, the consumers are beginning to benefit. However, don’t walk away with the wrong message, we never said turbos were better and more fuel efficient than hybrids, were just saying it’s nice to be able to step on the gas pedal and feel performance without worrying about the gas gauge dropping to empty. Below is a list of 2013 Turbo Models.

Posted by Matt Stringham at 5:49 PM